We All Have Our Fears-Letters From Dad

WE ALL HAVE OUR FEARS- Mick Hergert 2009 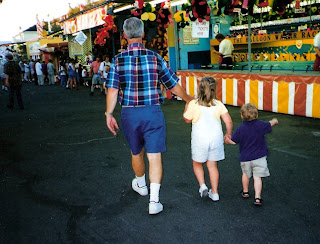 Tradition is something many of us hold dear to our hearts.  Sometimes

traditions last for a long time, or they can be short, transitory

episodes of one’s life that when looked back upon, are remembered more

fondly than traditions that go on year after year.

When my wife Donna and I started attending the Oregon State fair, we

enjoyed the variety of things to see and do, the animals, exhibits,

various foods, entertainment, and of course the people who make up

much of rural Oregon.

Naturally we wanted our two oldest grandchildren, Chelsea and Jake to

understand some of the things that drew us there. Somewhere in those

years a tradition began, and as Chelsea and Jake became older, and

other activities would not allow them to accompany us, they were

replaced by other eager grandchildren, who found out that grandpa and

grandma were paying for all the rides, food, and goodies that were

allowed them by their parents.  Many were the times, when Donna and I

were leading three to five little ones around the fairgrounds from

ride to ride, and food booth to food booth.  And when we left the

fairgrounds, usually when it was growing dark, we would all troop,

generally in a happy mood, to the car with whatever souvenir those

lesson from Jake that I have never forgotten.  I have only recently

come to realize the truth of what he told me that day .

It was a beautiful August evening, the sun was below the western

horizon, and all of the evening lights were turned on in the

fairgrounds.  It was a brilliant and colorful end to the day.  I

suggested that we ride the gondola cars, an aerial tram thirty feet

above the ground, over to the other side of the fairgrounds.  Jake and

I captured a gondola and my wife and Chelsea took the one behind us.

grandchild alone, that you can talk with them of many things, and you

have time for it.

As we were moving at a leisurely pace, high above the fair-goers, we

could see all the movements below and around us.  The rides, lit up

around the grounds, were easily visible.  As Jake and I chatted about

the day and the activities of the summer, I couldn’t help but notice

in the distance the brightly lit Ferris wheel.  I pointed it out to

Jake and as he looked at it I asked the question: “Jake, would you

like to go on that Ferris wheel?”  He turned directly to me, his blueeyes looking into mine,

hesitating, as if thinking about what he

thought I might want to hear, and then said “no”.  He turned away, and

I asked him “why?”  Turning back and without  hesitation he said

“Papa, we all have our fears”.

How profound for a second grader. We certainly do have our fears.

Some are real and some imagined.  Nonetheless, real in our own world

view. Fear will stalk us, try to overtake our souls, and inevitably

paralyze us from living, if it can.  Most of us have trouble

describing the emotion of fear adequately, but we all know when we

feel it.  It can be a cold dread that sweeps over us, a foreboding

going to happen.   It is the unknown of something, the uncontrollable

“thing” out there, the unseen.

Fear is almost like a person.  You can see him in other people’s eyes,

their actions, and their words.  Fear has sat with countless soldiers

in foxholes , in prisons, in dark alleys, in homes, on the athletic

field, and in Ferris wheel seats.  It sometimes runs right at you, or

is in the form of an inanimate object, like a baseball coming at your

head at 90 miles and hour, or an elevator door.  It is proportional to

one’s situation, but none the less, very real.  How we respond to fear

is a good measure of the internal peace that we may or may not possess.

Sometimes fear is good.  It can keep us out of trouble.  We can fear

decisions not to engage in an activity for fear of harm in some way.

That was Jake’s fear.

In February of 2009 I experienced a ventricular fibrillation attack of

the heart that  was a near death experience. Fortunately, I had a

defibrillator device in my chest, implanted the year before because of

previous heart problems, that brought me back from certain death.  I

describe this experience as “Ten Seconds From Eternity”, the time it

took for the entire episode to play out.

I don’t know when it hit me, but at some point in the following days

I began to feel tentative about myself.  A thought would come that the

next step, the next word, anywhere and anytime, could once again be

the overwhelming cloud of unconsciousness I experienced.  It was

especially evident when I approached the elevator doors in my office

building, the scene of my attack.

and it could happen again.  I thought that an electrical field around

the building elevator was the culprit, setting off my device since I

had previously been instructed not to operate chain saws or power

equipment close to my chest, or even lean over a running auto engine.

I felt that there was a time bomb sitting in my chest, waiting for the

right circumstance to detonate it.  I thought there must be a rational

trauma.  The only solace or comfort I felt was knowing that I had a

“paramedic” in my chest, but I was still fearing another traumatic

episode because of the violent nature of de-fibrillation.

I approached the elevator doors where “it” all happened.  I hesitated,

stretching my right hand for the up button.  Then I felt something in

the base of the neck and it began to go up into my head.  I stepped

back in fear, thinking that “I was right”.  I stepped back a few more

feet, my head cleared, the elevator door opened and I rushed in to

escape the area, not thinking that if there was an electrical field

force of some type, it had to be in the elevator also.  I stepped onto

the third floor, relieved and realizing it was my body responding to

The feelings of the first day diminished over the next two days. By

open immediately,  which they did to my relief.  Then, one week later,

I had to wait.  The elevator is not a fast one.  It is the slowest in

America.  I often told fellow riders that you could brew and drink a

cup of coffee before you went the three floors, up or down.

When the elevator doors would not open immediately, my fear processes

started and then stopped, as the thought came to me, “who is in

control here, is it God or is it the author of fear?”  Knowing this, I

elevator with a reminder of God’s presence.

The scriptures are full of references to fear.  The Angel of the Lord

said “fear not” or “do not be afraid” to Zechariah, to the shepherds,

to Mary, and to Joseph.  The beautiful 23rd Psalm says “ I will fear

no evil, for you are with me” and the 27th Psalm starts with “The Lord

is my light and my salvation, whom shall I fear, the Lord is the

stronghold of my life, of whom shall I be afraid?”

Fear can be impelling to death, or it can be as insignificant as the

fear of failing a task.  It doesn’t matter, fear is fear.  And it

causes our body to respond in strange ways, like paralysis, tight

muscles, crying, nervous laughter, a tense neck, we all identify with

Is this just a feel good verse, or can it be a reality in our lives?

the flesh gets in the way?

When Jake and I were in the gondola talking about fear, his immature

mind couldn’t grasp the thought of his fear as being silly, and out of

proportion.  It was out there and he didn’t want anything to do with

us”, because it still happens to me, to all of us, and at different

times and circumstances in our lives, especially at night. As a player

and coach in athletics, I knew what fear could do to a player.  The

step is not as quick, the intensity is lower, thinking functions

diminish, rationalization occurs, and if things are going to go wrong,

Psalm 91 speaks of dwelling with the Most High, resting in the shadow

of the Almighty, the declaration that He is our refuge and fortress, a

“We will not fear the terror of the

For me fear penetrates most deeply in the dark of night.  It is that

tears of worship, lying on my back, my arms up raised, singing in my

mind to not wake my wife, and praying to our Lord for His will to be

done in my life.

Fear is not always an isolated event .  It spills over to those

closest to us.  Over the last ten years, since my heart attack at age

57, my wife has had to face her fears, like the five times that she

has followed an ambulance with me in it, and what  a phone call may

bring.  Fear does not have to defeat us. First John 4:18 says that

“perfect love drives out fear.”  Who represents perfect love?  I give

you one guess.  You are right, good job!  Fear is real and lives in us

almost daily, but it will not defeat us if we know who our redeemer is.

Fears will come and go depending on the circumstances. BUT, are we

more than conquerors?  Romans 8:37 says “in all things we are more

neither death nor life, neither angels or demons, neither the present

or the future, nor any powers, neither height nor depth, nor anything

else in all creation, will be able to separate us from the love of God

that is in Christ Jesus our Lord”.  Isn’t that powerful?  They are my

Jake, or one of the other seven grandchildren, when they turn to me in

their innocence to express their fears,  . . . or even their joys,

hopes, and dreams of life.

Posted by Courtney Spears at 6:36 PM

Email ThisBlogThis!Share to TwitterShare to FacebookShare to Pinterest
Labels: Letters From Dad