Ok.. so that might seem a little harsh and shocking to "gifted" party planners, but after putting on several parties for our kids I have decided party bags, favors, and parting gifts, whatever you may call them, are completely over-rated, unnecessary, and WAY too expensive. In fact throwing an "acceptable" kids party has evolved into a monster of a task, especially when the comparison parties seem to be bigger, better, more expensive, more more MORE MORE MORE MORE MORE MORE!!!! augh I'm already tired and broke thinking about it.
Remember going to parties when you were a kid? I was invited to only a few parties of our neighborhood friends. We wore our best party dress, brought a small gift, wrapped it in the comics newspaper and off we went.
We looked forward to arriving at the birthday friend's house (of all things imagine a party at a house), played the usual pin the tail on the donkey and musical chairs 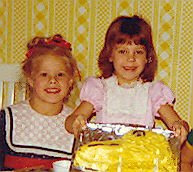 where there was only ONE winner for each game.
That person got a very small prize, usually a color book, super ball or a pencil. After games we went into small kitchen crowded around for the homemade cake, vanilla ice cream, sang the song, and then got in a circle to watch our birthday friend open gifts, which most gifts were never duplicates because most kids only got things on their Birthday and Christmas. That was it! The funny thing is that it was fine that THAT WAS IT! I didn't expect anything in return for coming to the party because it WASN'T MY BIRTHDAY! interesting concept! (picture of my friend Sara and me at my 5th birthday holding my home-made "bird" cake. Way to go mom!)

Fast forward about twenty years, somewhere along the line of parties some clever little mom with a nanny and personal assistant had an idea! NOW we have to have a theme and with that theme comes, matching plates, napkins, cakes, balloons, table clothes, and every party favor to go along with it, and of course the games coincide with the theme and each guest is sent home with a wonderfully thought out parting gift. "WHAT?? who came up with the parting gift for the guests, I've never heard of that and how much?" was my husband's response. I don't blame him at approximately $5 a kid that adds up quick and of course when they get into school the new rule is you have invite everyone in the class to be politically correct and make everyone feel warm and fuzzy. That element always brings confusion of how many party bags, who did and didn't R.S.V.P and "OH NO" someone showed up and didn't R.S.V.P. and I don't have a party bag for them!" Home party grand total = $200.00 and one sad kid who's mom forgot to R.S.V.P and left without his party loot. I thought I was saving money doing the home party option, which is why suddenly the home party started losing its appeal to many. After all, for about the same price you can go to the bowling alley and they even clean up. Well, sooner than later that was scooped up by marketing too and the cost for any party outside the home will run about $150-250 plus extra food and party bags! Seriously?? that is after I spent a lot already on gifts for the my own child!
After 3 kids and several parties trying to be creative and "top" the previous ideas, I decided to put that party fiasco to a halt!!! Unfortunately, my youngest feels he got the short end of the stick here so we are careful not to show him old pictures of past parties. 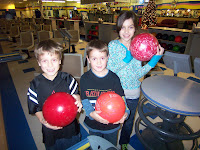 I really am amazed (astonished really) when I go through a back pack after school and find a blank envelope with a invite inside to a kid party from a random kid in the class that I don't think has ever said "BOO" to my child until now. Sorry... not going to shell out $15 bucks on that one! Which brings me to my other point.. what in the world do we buy friends we hardly know, who have everything, who only play video games, and that will pass the test of "cool gift" for $10-15! It's one thing if they are actually friends but seriously this "invite everyone " has gotten way out of hand. Just invite a few and REALLY we are totally ok with not getting invited, and totally ok that our kids don't connect on a deeper level at age 6.. it's really ok!!
About a month ago, my two boys were invited to a new friends party they didn't k
now very well, but none the less wanted to go to the party. There was no RSVP on the invite, just instructions to the house "call if you have questions." Well... we showed up and asked when the boys should be picked up? Much to my surprise the dad said "oh whenever", it was 5:30 so I'm thinking hmm.. 7? 7:30? "What about 7:30" I offered, he said surprised "OH at the earliest really just whenever" so I said "oh ok...how about next week"? That's where the "whenever game" stopped and I was given a strange look. So we decided that 8:15 would be a healthy pick up time. When we got there, kids of all ages were running around, there were a ton of finger foods, and lots of adults mingling, wow it was a normal party how odd for 2009! There was no theme, just a bunch of friends and family getting together for a chance to play and have fun together in honor of their son's birthday. My boys came home without a party bag, no candy, full tummies, sweaty hair and clothes from all the chasing and said "that was the most awesomeist party!"
Kudos to those parents who didn't get trapped into the "marketing" of putting on a child's birthday but just made it an enjoyable normal birthday with no grand finally. I wish I could do it all over again and not create the expectations of a "good party" that my kids seem to have. Hopefully this will be a warning to new parents of what not to do, even though m
arketing and the movies does such a great job of making it look worth and the thing you HAVE to do for happiness. How about we wrap that lie up, put it in a HUGE party bag!

Posted by Courtney Spears at 5:39 PM

Email ThisBlogThis!Share to TwitterShare to FacebookShare to Pinterest
Labels: thinkers