It is amazing what we do early in relationships that might never have crossed our mind prior to meeting the love of our life.  How can two people from completely opposite upbringings actually function normal and find things to do that seem like normal activities.  I found this out 3 mo. after getting married to my "outdoorsman".  I was raised indoors, with the exception of the 8 week period of warmer weather when we then stepped out back to dip into the pool.  Our vacations included the words hotel, pool, rides, beach, food and shopping.   Much to my surprise vacation for my outdoorsman husband had NOTHING to do with the pool that was outside, but rather actually living outdoors, hiking in natural environments, climbing to high peaks, and cooking freeze dried "food" over a tiny gas flame.  I was absolutely appalled on our first back-pack trip to the wilderness where the bathroom was a hole WE MADE in the dirt...seriously?

Three months into our marriage I decided to prove that I was not a sissy stuck-up "pool girl", and decided I'd climb Mt. Shasta in Northern CA with my new outdoorsman husband guide.  He had climbed it several times before in 6-8 hours, so how hard could it be?  He was very excited to show me the world outside of "tourist trap USA".    Plan "A" was to stay in a hotel (WHAT?? SWEET!) until about 3am and start hiking then using moonlight as our guide getting to the top around late morning.  We decided to save money and do plan "B" which was start climbing at Midnight.  I must say it was pretty cool to be out there doing something so out of the ordinary for me, but those feelings soon faded when delirium hit at 4am on the side of  steep cold snowy hill. My "guide" decided a small nap would be helpful before heading in the steep climb, that was thoughtful of him!
There is a section on Shasta called the Red Banks which my "guide" said should take me about an hour to get through, yes well neat idea... but 6 HOURS later we were finally through the red banks.  THEN you get to the false peek which APPEARS to be the top of Mt. Shasta only to realize you have much farther to take your aching feet, in rental boots, to accomplish this ridiculous journey of a lifetime.  I was steaming mad at that false peek and my "guide" for thinking I could do this with a "pool girl" background. We FINALLY reached the top of Mt. Shasta with a new record for slowest time with a seasoned guide.. 14 hours!!!! yep tears at the top, anger, writhing pain, and wishing SOMEONE would have thought about a Romantic HELICOPTER pick up... but noooew...   The fun part, if any, about Shasta is you get to slide down the face of the mountain on your bum this is called glissading, only watch out for loosened rocks and other sliders! By using this method we made it back to the car in 7 hours. My knee squeaked funny for 3 wks after that climb.
Ok...so that was many years ago and I have never been mountain climbing again! I pull the card "but the kids" a lot and explain how nice it will be one day when we can do some of those trips again (which at that point I may have arthritis).  This weekend my outdoorsman is out there somewhere enjoying the wilderness with some friends.  I miss him, but I know he's having fun, and we would've slowed him WAY down and I would've been worried all wknd that bears 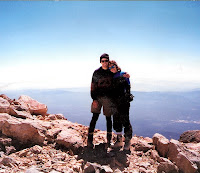 would eat the kids.  I stayed home with the kids and went straight to the nearest pool, and it was great! I do appreciate the outdoors and the easier hikes our guide takes us on and he is good about doing things we all qualify as vacation, so it works out.  OH! and he always comes back from his adventures with his cute scruffy whisker face and leftover peanut m&m's!

According to http://en.wikipedia.org/wiki/Mount_Shasta - More sources »
Posted by Courtney Spears at 11:22 PM