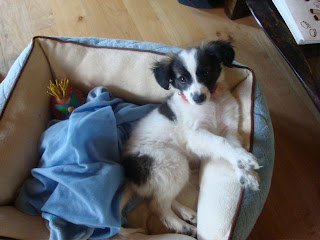 "I guess that is ok" are the words the kids and I heard on the other end of the line one August afternoon from my husband. The 3 kids convulsing with excitement like something I have never witnessed. Apparently, those words do not mean "yes, that would be great bring a dog home today", which we didn't interpret correctly. Driving home with our cute new bundle of puppy joy we thought we made quite a wise choice choosing a small dog which is referred to as a "toy dog" evidently. Wow! was I shocked at the lack of welcome home and excited on Ward's face the first time he laid eyes on the new little 4 legged fur ball in our house. We introduced Ward to Charlie (who was "Joey" for 24 hours until we felt that wasn't a good fit) and there began the 5 week grumbling and high levels of stress in our home.
The novelty of playing with Charlie became more of a demanding threat after week 1, once he began to take skin off the kids. As adorable and loving and well-behaved Charlie was, the man of the house was not the same man I married. I was beginning to picture me and the kids and Charlie writing "come back home" letters to Ward at the office. There were many close calls of droppings left unattended and realizing the man of the house was en route to that area (why is the Cat and the Hat book coming to mind) so we'd distract, pick-up, throw-out and remind him how cute Charlie is. About the 3rd night we decided to lay down the law and have him sleep in the laundry room, only Charlie was not going to have any of that. He already figured out how to leap over the baby gate so leaving the door open wasn't an option any longer. What proceeded was the loudest yelpiest barking until 2am and one angry man of the house. So I did what good parents, I mean parent, does with any crying "baby" I rescued him and brought him in our room which brought grumbling sounds like I've never heard and a strange plume of smoke hovering over the left side of the bed where Ward had pretty much had it. After trying many things I decided to start over, clean slate, and kennel him at night. WAH LA! Charlie loved it and slept in our room all through the night until I took him out in the morning. What a wonder dog!

I thought I saw some glimmer of hope when Ward came home would pet the furry little dancing pet at his feet and I saw there a SMILE!, but that was just a cruel hopeful moment once Charlie decided he had a fondness for Ward's toes. I would set up "moments" of a happy family enjoying our completeness with a dog "snapshots" if you will, of us in the backyard as we played football with the dog running around and throwing apples for him to chase displaying his amazing talents and smart abilities of a "show dog". Moment's I thought "I think we are getting some where".
Part of me understands his angst, after all, if the boys decided to invite a pet snake or Lizard, I would likely pack a bag and never look back, but Charlie never hissed or slithered in an uncomfortable creepy way. So after 5 wks of giving a good shot and remembering days of yonder when my husband had a smile on his face and dreamed about tomorrow together, I realized I had to decide between the dog and him. After spending a long wknd at the beach making a list of pros and cons and flipping through my wedding scrapbook, I decided to find a new home for Charlie. Ok... I didn't do that, I knew I needed to find a new home for Charlie. I found him a wonderful home where they actually find it fun to have their dog lick their face, sleep in the bed, drive all over town and Charlie made fast friends with his new brother a huge lab. I guess they make quite the scene as they walk down the street together. Surprisingly, I grew quite attached to Charlie not realizing I was more of a dog person than expected. I now see the other side and understand fully why people like to dress their dog in a knit sweater. I don't understand allowing them to lick their mouth though.
As I cried when I handed him over, I felt like a terrible mom for giving our pet away and knew I'd need to gain my composure and realize it was for the best. I cried that night in bed and then realized the next morning that I was totally relieved to not have to go out in the bitter cold and dark nights saying the word "potty" over and over and getting freaked out in the dark wondering if my "toy dog" was being marked by a wild beast lurking outside waiting for a bedtime snack. We just aren't dog people and as my middle son summed it up the day after the adoption process.. "good, now we can get back to normal!"
Posted by Courtney Spears at 8:15 PM