Oh Yay a free trip at 10k feet!! In the Death Tube Of Destruction!!! 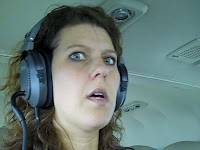 I’m writing this blog at 10k feet above Idaho in a 10 seater plane. Normally, I would not choose this form of transportation but when it was offered as a mode to get me and my family to summer vacation in CO and then driving and RV to Yellowstone from there, that’s a no brainer.
I’ve had a fear of flying since the early 90’s. It was at a time in my life I was looking for a job or career and decided flight attending looked, well,… easy and fun and what could be more exciting than flying all over the world making money while serving pop (or “soda” for you non Oregonians) . I had flown several times in college for sports and half way around the world to Australia my sophomore year of high school, but for some reason the college trip to Scottsdale AZ left deep scars, after landing awkwardly and having suitcases fly out of the overhead compartments. What on earth made me decide to fill out an application for flight attendant two years later, is beyond my understanding.

I soon ripped the application up realizing after an easy flight to LA that summer, it was not normal to grab the passenger next to me and slam my foot to the ground on our approach (in order to help the breaks work of course). The guy next to me was actually ok with the attack, but I realized that this might be in issue if my job as a flight attendant was compromised by me attacking passengers, heavy breathing and screaming “SAVE YOURSELF”.

As life has it, planes can’t be entirely avoided, so now when booking a flight I only go places where the safest plane travels to. That said, I have traveled only on the west coast so I can take Southwest or Alaska (I have recently learned those planes do go other places than south and to Alaska). Alaska was tainted on my list of acceptable flying options after the 1991 crash at Santa Barbara, but it is always a the second option.

When I do fly I am constantly aware of any bumps or jolts as well as watching the many faces of the regular business travelers knowing to them this is much like jumping on a city bus commuting to work (only it is 30k feet in the air!!!). I watch carefully for any eyes that suddenly wake from a slumber and are open wide. Heads looking around is another clue that there is discomfort, and of course the nervous half smile half laugh that appears in times of danger. Constantly watching for the wing to pop off or the thin tip of the end of the wing shaking as it cuts through the wind is usually unsettling. Throw in the terror alerts and the people who I am creating a profile on… (I know, I know, but there are some hats, facial hair, eyes, TURBANS, that just cause me to wonder) I’m a mess of nerves. Only to get teary eyed when we are finally are on the ground completely stopped feeling like I have a new lease on life. Wondering what shall I do now with this new found freedom on land? I leap into the air and twirl yelling… I’m going to be a better mom, wife, maybe exercise more, make great meals, take a class, go on facebook and find my 1st grade teacher cause I know she’ll care and want to know her efforts AND the Dick and Jane books did paid off, and I am a survivor! (Back to current life threatening airplane ride taking place) “Oh good, we are landing! Buckle up everyone!"

(1/2 hour later) So we made it to our first pit stop, but it was brief and at a small airport near Salt Lake city that looks like 1970’s smoking lounge. Homemade (with love) sandwiches are consumed and we are back in the death tube of destruction. I gotta tell ya, pilots do a lot of “look ma no hands” action. I had no idea and will be reporting that to the plane owner!

Oddly, at this point in the trip, this plane seems more safe than the big 747’s. I’m thinking it might have something to do with the fact I know what is going on at all times and can choose to listen to the tower talking to us. I can see that the pilot cares and isn’t dozing off or overshooting the target city because he is gambling on his laptop. It would be such a nice feature on the commercial jetliners for us fearful travelers to be able to hear the control tower be in control... The word “clear”, “Roger”, and “Confirm” are such nice things to hear over the airways. I think I’d really feel a lot better if my mind wasn’t wandering all the time thinking “ok do they know we’re coming in? Is the runway clear?

Meanwhile here on the little plane, we’re heading into a cloud right now that looks a little small, and there is lightening so I think cloud= turbulence and that might change the whole enjoyment of this adventure (BUMP)…Yep!!!!… I HATE THIS.. WHY DID I EVER DECIDE TO GET IN HERE.. THIS IS THE DUMBEST IDEA, I DON’T CARE IF IT WAS FREE WHAT WAS I THINKING!!! RADAR SHOWS GREEN AND RED SPOTS AND WE’RE HEADING OVER THE ROCKIES. NICE……..OK, I NEED TO CONCENTRATE ON STAYING ALIVE.

So we made it, but here is how it went down.

Shortly after I closed the computer from blogging-to stay alive I hear..“I’m gonna be sick” from the “co-pilot” (my middle son). He was once enjoying this spectacular view. Thankfully, I brought some giant black trash bags for our planned return trip so I run to the back and grab the trash bag hand it to “co-pilot” who began hurling his lunch that we just ate in Ogden Utah (so glad I got up extra early to make sandwiches). Suddenly, like frat boys at a party, one after another, my family began to say “I’m going to be sick” and black trash bags are flying out of the box as fast as I can go all while trying to keep my own lunch down and not think about the fact we are 12k feet in a metal tube going towards tall mountains, diverting from lightning and bouncing around through down drafts. I sit down, look back, and all of them have their faces in black trash bags throwing up continuously. The cabin begins to fill with a nice stench. Those mountains are absolutely breathtaking however I’m praying we make it through the small window straight ahead through the peaks, which I ask the pilot if that is going to happen. With all the chaos I almost forget to video my last moments, and If we do all survive I’ll want everyone to see the Rockies they missed while looking into a trash bag.

Once over the Mountains, thinking “Ahhhh we made it” which I then see the weather in Denver CO and it is terrible. We get diverted a few times and circle waiting our turn to land.


As we approach the runway, we are getting so much wind and down drafts it is tossing our little plane around and I really begin to wonder if we are going to pull back up or go for it and roll around on the runway. We go for it, with the pilot wrestling with the controls to keep the plane parallel. We approach the runway he lands on one wheel slightly tipped to the left and then we tip to the right and land. I was sure grateful for a pilot that knew how to handle that sort of situation, it was pretty impressive. The original plan was for the pilot to fly right back to Portland but he decided that wasn’t safe.. uh yeah. Gosh, maybe I would’ve cut it being a flight attendant! Below are actual slow motion snaps of my face during the turbulent storm....lol 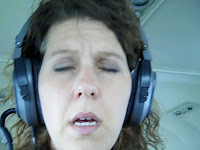 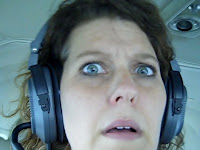 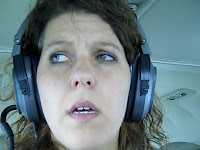 Posted by Courtney Spears at 10:45 PM