Joy in the Back Row

Today I witnessed such a touching moment in a plain ordinary volleyball game.  It actually wasn't all that plain, after all this is 7th grade recreation volleyball where you have to be on high alert watching, or you just might get a ball in the face!  It is great fun to watch!

Due to my own coaching responsibilities at the High School, I haven't been able to make it to my daughters game yet, but today it worked out.   Such a difference from gym to gym where my team's goals are different and 3 hits and killing the ball on the third is the priority.  In the 7th grade gym there is pure elation when a serve goes over! Eruption of cheers for a pass and an attempt to get the ball back over, those are all noteworthy triumphant moments whether a point is scored or not. 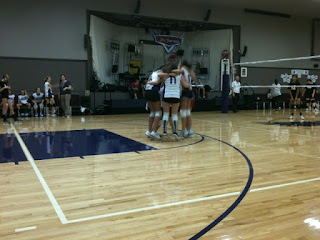 In the high school game we no longer call our 3 hits a "bump, set, spike", rather it is called a "pass, set, hit" with spike being semi acceptable and understood,  but "BUMP" term is never used, and I figured why today.  When I was in 7th grade we would yell out "BUMP, SET, SPIKE" each time we'd receive a serve and usually just get past the "BUMP" in the cheer and then it was a dead ball.  Well let me tell you..the "bump" is still alive and well over in today's 7th grade gym.  A "bump" is a perfect word for this "skill" because most the time, with a running start, the player launches that first serve receive "pass" right back over the net or with severe fierce and arm movement, the "bump" nails the ceiling so hard everyone is ducking for cover below, I'm sure you have witnessed this yourself.  Even the crowd is sitting on the side lines with hands up ready to deflect the forceful "bump", daring to take their eyes off the court for fear of a flying volleyball smashing the new nose job.  Sooner or later the understanding of 3 hits sinks in, and hopefully by the time High School comes around, the crowd can safely watch a volleyball game with a drink and popcorn in hand.
Which brings me to the joy in the back row that I witnessed today at the 7th grade match.  Substitution for the back row serving position enters a tall mentally challenged girl.   She was just happy to hold the ball and be on the court.  Not sure if she could really see what she was doing, only making small gleeful noises, but I could tell from the faces on her teammates and the coach, this was a special moment for all.  She waited for the whistle to blow, was standing in the middle of the court about 5 steps up from the normal serving line, the whistle tweeted and amazingly she hit the ball in a sweet spot in order for it to trickle over to the other side (cheers from the crowd), where a girl's attempt to "bump" made the ball fly out of bounds.  How elated the team was for this sweet challenged volleyball player who scored a point for the team.  Actually, the whole gym was cheering regardless of what side they were cheering for prior to this grand substitution.  Game point, she has the chance to win the game, (which I quickly thought of all those movies and news reals showing the special needs child launching ten 3 pointers in a row with the crowd going nuts) "tweet" of the whistle, and then the crowd in a chorus "ohhhhh...." as they watch the ball hit her hand funny and go no where.  Oh how we all wanted that amazing ending, but it still was a winning moment as we watch her teammates rally around her.  Time out called and a substitution out, her teammates came around her, high fives and hugs and a big hug from her coach.  I thought what character and maturity for these jr. highers , who normally might be more worried about the outside appearance, impressing others, usually more worried about themselves as we all are sometimes, but showing such friendship and loving your brother (or sister in this case).

I don't think I'll ever forget that moment and I hope my daughter won't either as she watched from the other side of the net.  How often we take for granted our gifts and talents God has given us, complain about sore legs, too tired to get up because we had a tough weekend tournament in soccer, forgetting the joy of being out there and playing the whole game.  My mom always reminded me of  "to whom much is given much is expected", which I think is very true and as much as we always fear sounding like our mother's, I sure want to pass that a long to my daughter so she understands how important that perspective is.

Posted by Courtney Spears at 9:14 AM