"Is That Lawyer Wearing a BUMP IT?!! Go Girl!

I got my number called for Jury duty. I had just served in a different county about a year 1/2 ago, but moved to a new county and was welcomed right in to my civic duty of being a juror. I figured it would be a similar one day event, and with the room full of people I figured my chances of actually getting on a trial would be slim. I debated dressing like a crazy woman, teasing my curly hair to a giant frizz ball, and making strange jerking noises all in hopes to be excused on reason of insanity, but I chose the middle aged woman look. Actually, after day one with all the 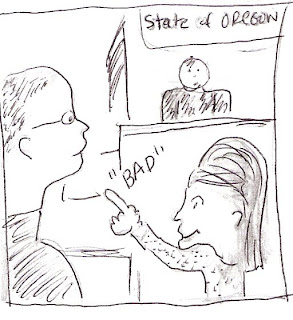 rain and no real time to check "the look" I came home and surprised my family with the horrendous hair and weathered look I was sporting. I still got picked as one of the twelve jurors and I'm sure the judge and lawyers were wondering the second day who the new juror in seat 9 was! I found out the trial would last 3 days. UGH!!!


I'm listening to the testimony and the intimate details of these people who look "normal" on the outside, but share the details of wild nights and a lifestyle I only thought existed in a poorly made for MTV movie. I mean who really kicks their fiance in the family jewels that much? No wonder this guy who calls mommy for every little thing is sitting here in the hot seat after a boiling pot of anger finaly burst. No excuses though, you still messed up. I was looking forward to day three when mommy took the stand, I expected to see one heck of a woman, wearing a roller derby t-shirt, tatoos and peircings, after all she is the one who gets all these phone calls when her poor boy is getting beat up. My anticipation was for nothing when mommy walks in the court room (holding her baked scones and wearing her knitted sweater) I see she is about 60 and probably has never done a push up in her life. The Lawyers asking the same questions in 30 different ways and me taking good notes so I don't screw my verdict up, this case is at least pretty darn interesting. I mean what a system that lets 12 people plucked off the street come in and decide the fate of this guy based on he said she said. I'm sorry but I deal with this every day at home and don't feel like I'm that great at the process. A system where the Lawyer has to go to school for about 7 years to learn how to argue really well and twist things in a crafty way to make it seem right to a bunch of people that just really want to have the the guy in the Judge seat wearing the OFFICIAL robe just make the decision. I mean he has seen this a thousand times before and most likely knows the laws and what is appropriate, do we really need to play this 3 day game of Law and Order? After sitting there hearing the same information and an hour long closing argument from a very dull and boring lawyer that has no chance for his case, is shaking and sweating from his brow, I start noticing things around the room. How the Judge looks like Clint Eastwood. Hey that lawyer is wearing a BUMP IT!! NO WAY!! but she's cute, huh wonder why she isn't married? could be because she is here all the time or has her face in a book, she does have a cute style, but MAN I wouldn't want her prosecuting me.. she's good. The defendant, I can so picture him wearing a one piece orange jail suit. Hmm... court reporting would be kind of interesting, but then I'd be here all the time...wonder if that cute hutch I saw on my lunch break at the antique store will be there next week? You can see things, beside my plume of hair, got a little fuzzy at trials end and I had pretty much made up my mind long before this. The hardest part is not being able to talk about the case at all until the jury comes together in the end. Thankfully, we all came to a quick verdict and were on the same page. I came away with a few things from my experience.

1. Not a good idea to drink shots of vodka, drink beer, and then come home and drink 2 more shots, that leads to bad choices.

2. People who "party" really drink a lot of alcohol!

3. It's wise to be able to draw your house in a flash! for those days when a lawyer might ask you to draw it and label it. I was pretty impressed with the witness' artistic ability.

4. If you are hanging out with people who are drinking and living a lifestyle that drinking and partying is normal on a week night, you may want to take careful mental notes in case you are called as a witness a year later!

5. Those same people should also be wearing a head cam at all times.
and finally number 6!

6. You people might not think your actions affect anyone else and it is not our problem???? Well let me tell ya, I spent 3 days away from my family to put your butt in jail, my husband had to juggle the kids pick up and drop off while running his business, as well as my mom giving up her time to do what I normally do, I was up early & home late, we had to spend money on food for dinner because I wasn't home to make it, as well as 11 other people with similar stories of time from their livelihoods that most likely are making much better civil choices than you. I spent gas money for 3 days and time away from my normal responsibilities(which will not be reimbursed to its value), ALL the witnesses, the police officer that had to take time to testify and so on. So yeah, your careless actions do affect others.

On a side note, I'm glad we live in a country where the system seems to work for most of the time and now that I put in my time I am free to go about my days for the next 2 years not worried about getting a jury notice. Though I might opt for the crazy lady look, twitching in the corner, frothing from the mouth next time, so I am dismissed completely.

Posted by Courtney Spears at 11:35 AM