One Person I Will Get On a Plane For 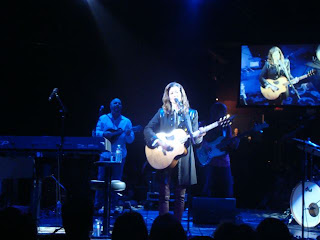 You know I love music, but I'm not one of those people who have a list of bands I follow or a particular artist that I would go miles to see unless of course her name is Amy Grant.  I am one of those "sappy" fans that when meeting Amy on several occasions says "I've been to every concert since I was 8 years old".  WOW now that is original, I'm sure she hasn't heard THAT before!!  She always is so gracious and kind and makes people feel special anyway. It is nuts as I secretly think maybe we'll have a connection in this brief 30 seconds, maybe she'll want be pen pals.  I realize that is so 4th grade!!! But that's about the age I was when she first signed her album to me and that's the pathetic behavior that comes out when I meet her.
My family helped me celebrate my milestone birthday by flying us girls to Arizona to see Amy and Michael W. Smith for their Two Friends Tour! What a better way to bring in this next decade of my life listening to music that literally shaped my growing up years and beyond.   I hate to fly, but felt that the 23 hour drive on a weekend just didn't make sense and I was not going to miss this concert!
We get to the airport with plenty of time to eat and relax before our flight.  Get to the gate only to realize our plane has already called for boarding!!  The "A" ticket holders have already found their seats on the plane and the other 75 "B" people are staring at our group of 4 disappointed late "A" holders squeeze in the "B" line.  Still dumfounded at the mistake and worried about seat placement my sister is visibly shocked at the airlines early call to boarding!! I say.. "um are we sure we are the right flight?" Which when re-looking at our boarding pass realized that in fact our plane was taking off from the next gate over, the one where all the "A" passengers are quietly seated playing on their phones. We excuse ourselves from the "B" line and giggle our way to the next gate.  Once on the plane my previously dumfounded sister who went ahead of me, quickly picks the very first row!! The seats with the leg room and the one that if you hit a mountain or anything instead of the runway you will be the first to die after the pilot!!! This just did not sit well with me so I sat with my mom in isle 2 which for me still wasn’t as safe as it should be near the wing.
We arrived safely (thankfully) and spent our first day shopping in Scottsdale.  We scouted a few dinner places thought our idea of eating at a Mexican restaurant was a great one until we decided to leave a great little place and find something that didn't have a 20 minute wait and perhaps closer to the concert venue. (Note to self, stick with the 20 minute wait!) We ended up driving around for the next 45 minutes trying to find a suitable place to eat.  Hungry women in a new city and not finding anything can lead to some stressful moments, but we finally found a Mexican place that looked rather popular.   It was great food, but I ask you, when was the last time you were at a Mexican place that didn't have Hispanic music piping through the place. That just comes with the ticket! Instead as I'm biting into my enchilada I hear Barbara Streisand singing "Memories, like the corner of my mind".. ok that combination was not on menu and about as odd as putting a baby to sleep listening to heavy metal music.  With a half hour to go until show time we load up and head to the arena thinking once again we had plenty of time, only to find a huge long line of cars waiting to turn into one parking lot.  There was one line from the east, one from the west, one from the south, and one clueless parking lot attendant that seemed to favor the south lane!!  This is where all the Christian love and patience was highly tested by all concert goers as the line of car drivers were becoming more impatient as the 7:30 start time was quickly approaching.  Nice husbands of their "Amy Grant fan wives" started prompting them to walk, which my sisters nicely told my mom and me to do as well since it was my Birthday.  After all, I'm sure they won't start right at 7:30!   We walk in the door at 7:30 and hear her starting to sing.  Ok, I guess they do start on time. 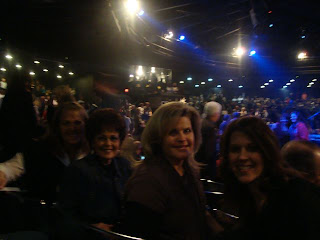 The venue was really great with a center rotating stage so every seat was a good one.  Our seats were 7th row which was close enough to see spit flying and quickly noticing that these two artists have been taking the right supplements in Tennessee showing no signs of aging and sounding the same 32 years into their career!  The second thing I notice is the NEW GIRL!!!!  Ok, I am used to Kim Keys singing with Amy for the last 10+ years and respect her greatly for her talent, even though I would arm wrestle her for the gig, but suddenly there is a NEW and YOUNGER girl!   I'm thinking why on earth did I not see this job opening on singerjobs.com last year when I was searching.  After all, I would be perfect for that position, we're Facebook and Twitter friends,  I know all your lyrics, songs, harmonies and doo whops needed to back you up! I have every album, some signed, you books, and other tour treats from the last 30+ years, I started singing because of YOU AMY come on give me a break for once! This girl up there wasn't even born when albums 1-20 were released and probably as no idea what an ICON she is singing back up for!! Amy then introduces her as her "I do" daughter.... OHHHHH ok, It’s Vince Gills Daughter!! Ok that fits the bill, I think I’ll take off my on stage glittering outfit and get back into my concert fan gear..
The thing I always love about Amy and Michael is their transparency, love for the Lord and that you can listen to them for hours and never want to leave.  Their songs are subjects we all deal with in life and you can tell they love what they do (wouldn’t we all!)
The crowd was eating it up, especially the 4 women in the front row I noticed while we were all singing “Open the Eyes” (of my heart LORD), which sadly they got a little carried away and mixed up with the memory and feeling they had in 1981 in the front row, when Amy unveiled the song “Too Late” complete with the electric guitar solo that rocked the Christian world off their rockers. (The same song that as a result, helped boost record sales through the roof for Sandy Patti that year from the over 40 generation, who cried foul, only later having to tuck their SP albums away too.)
So there I was realizing I just needed to close my eyes to open my heart so I wouldn’t be distracted by these women practicing their Zumba routines before the Lord and everyone else in the tight cozy arena.  It was quite the scene especially during the chorus.
The night closed with a encore of A & MWS singing the “Friends” song (see video) and us following the tour bus for a little bit until we chickened out enough to not go to the hotel they were staying at.  (For the record my middle sister did not chicken out if she is reading this)  I do have some sense of giving a person their space and not making a complete idiot of my self which has come with turning 40.
Thankfully Amy will be in Portland in September which hopefully by then she will realize the benefits of having a 3rd back up singer!! I have my resume ready if I see the posting.
Our trip home followed the same theme of arriving late to the gate even though we were 3 hours early. Thanks to the change in time to a later take off, and then having them switch it again to the original take off we ended up sprinting to security and to our gate where the line of “A” passengers were already lined up!  We thought my middle sister would be staying the night in Arizona as she took about 8 minutes to locate her I.D. for security.  I was a little disappointed that the hype of TSA pat downs was not enforced on me, especially after seeing the one employee in Portland that I gladly opted for his line.  My oldest sister wised up this time and chose NOT to wear the studded jeans through security, something that held her up about 15 minutes it seemed on the way out of Portland. I always thought that if they just put the 50 most beautiful celebrities in TSA uniforms, there would be no fuss from the travelers.
Here is a link to Amy’s discography (yes I own them all in some form) It was a great way to celebrate this next decade of my life, Thanks Family, and thanks Amy and Michael!