Took One For The Team-Crunchy Beefy Burritto 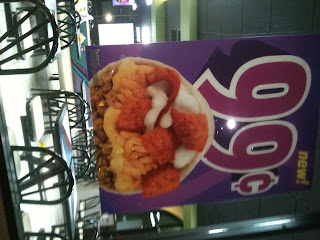 Today I decided the boys might like it if I picked them up from school, and brought them each a Crunchy Taco.  How convenient for me to think that because I was kind of hungry myself, and driving past the "border".  Lucky for me my car turned right in!  What I didn't know at the time was how I was going to fall right into the trap of good advertising and order the $.99 Crunchy Beeffy Burrito! I am one of those people who like to get the same thing each time I go to Taco Bell and is tried and true.  The picture showed rice, meat, melty cheese and spicy hot FRITOS!! what the heck?  This was totally invented by that person who puts potato chips in their burger.  I imagine my female readers are saying.. "NO YOU DIDN'T.. remember your resolution, remember pinky swearing that we would not do this again in 2012, remember back in college when all you ate were Chillitos and you rolled home.. "PLEASE STOP!"  Well sorry dears.. blame the snow today or me feeling crazy I just had to try.  I never rarely sometimes get in the mood for a good fast food snack,  but I  try very hard to not to frequent them too often. But sometimes that occasional Meximelt just screams "let me out of here" as I pass by Taco Bell on my route home, anyone one out there hear similar callings.  This is why it is not safe for me to carry loose dollar bills in my purse.  Actually, the Meximelt is really the biggest rip-off on the menu next to the Mexipizza as you get this tiny little soft shell with a little bit of meet and cheese.  I even have them leave the salsa off, and for some reason the Meximelt soft tortilla they use is $.69 more than the Soft taco's tortilla and $.30 cents more than the soft taco supreme! You can't tell me that salsa is more expensive than sour cream, and besides the Soft Taco Supreme also comes with lettuce and the Meximelt does NOT!  So I'm thinking that special seasoning in the cheese that makes the Meximelt so delicious is worth that extra $.69, who knows and now we are just splitting hairs or even more appropriate splitting pan...never mind I won't say it.

I ordered the boys tacos and then excitedly hollard over my rattling '01 Dodge moter "AND ONE CRUNCHY BEEFY BURRITTO" and right then I was committed.   On first glace, all looks pretty similar to a regular burrito but one bite into the shameful burrito I realize how ridiculous and distracting the Fritos were, not to mention they are hotter than putting 25 Hot Tamales in my mouth at once, and the last time I did that I had wounds in my cheeks for days  Holy COW!!!  With great pride I did finish it,  and made the special delivery surprise to the boys which they were over joyed and one of them even said.. "Hey I was telling someone at school I really want a taco after school!" (wonder where he gets those crazy ideas) again must be the snow.  My final star rating for the Crunchy Beefy Burrito is 1 star because an hour later my ribs and stomach are in pain and the inside of my cheeks are just now cooling off.
Posted by Courtney Spears at 4:08 PM