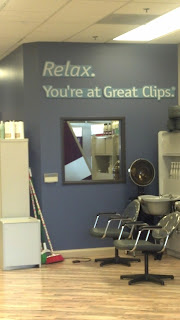 On a quick trip to Great Clips I saw their slogan on the wall, which seemed to be new since the last time we were there.  It reads "Relax..You're at Great Clips". As my head tilted to the side in wonder I couldn't help but think that is the LAST verb I would use for my experience at Great Clips.  Now here's a little disclaimer to this post.. the hair dressers at Great Clips..they are always REALLY nice but if I remember right so was Edward Scissor Hands.
Moving on, and moving passed the nice grins back to the slogan on the wall, I had to laugh as we rushed in to squeeze the boys hair cuts into our crammed day, knowing we could be in and out with no intention to "relax".  The second you sit in the chair the hopeful bit if any of actual  "relaxation" is immediately turned into anxiety as memories of the previous hair cut that caused the children at school to wonder who the new kid was, comes with severe flashbacks.  It's too late though you are strapped in.  My one son cries foul when he gets the same lady he had last time, but there's no turning back for him.  My other son lucked out with the new Male hairdresser that understands "the sporty look" only to realize later the back of his hair has a thick clump left over.   I sit down to "relax" and about 5 pages into my In Style Magazine I hear the man hairdresser say "MOM"? which I knew he was referring to me, but it felt awkward and strange coming from him.  That's when I get to inspect the hair-do as if I could really change any scissor happiness at this point, but inspections are necessary and relaxation is far from present in the room at the moment for either party.  Even if it looks terrible I can't really say "OH MY GOSH, It looks TERRIBLE!!!" Imagine the kid in that situation who gets to head back to school the next day, a school that allows no hats at anytime.  It's the hate if fake it scenario for all parties.    Thankfully, one of two cuts down and we're doing good so far.. and then I hear from older son "Mom, why does he have such a serious look on his face?" referring to my other son still strapped in the chair.  Now no head looks good with that tight smock snuggled around the neck.  I think it's the only way to make the person as closely resemble the practice head they use in beauty school.  He did look concerned though and for good reason, and definitely NOT relaxed.  "MOM, you come see" said the beautiful NICE Asian hairdresser.  My hate it and fake it came out in full swing as I see my new relaxed child.  Sigh..(poor guy).. nothing that a little gel can't fix.  In the car he says "Why did I have to get the Asian lady again.. she likes to cut  my bangs straight across... just because she likes her bangs that way doesn't mean I like mine that way... gosh!"  I encouraged him with the gel solution.  If I were in charge of slogans mine would say "Great Clips, It's Cheap you Suckers!"   If those coupons weren't so enticing!! I've tried to cut their hair before and it normally goes ok, but it takes hours!  Of course my husband will never forget the moment I was cutting his hair with the shaver without a protective attachment, using a comb only and I suddenly felt scalp.  "Oh Oh" is not something he wanted to hear but thankfully a little black shoe polish for a few weeks covered up the 2 inch wide bald spot. 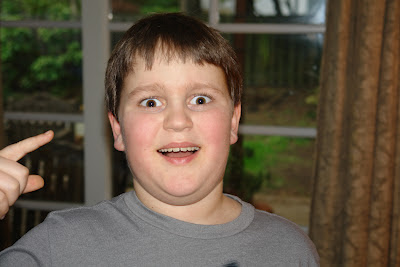 Posted by Courtney Spears at 11:25 PM