A Day In San Francisco -Where Daddy Gets All The Looks 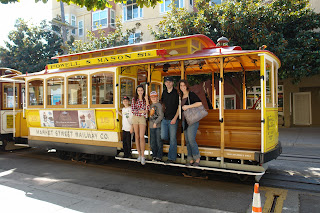 
Getting to the city is easy, finding the best most cost effective way to have fun and avoid going broke while taking in as many things in one day, is another.   The last time my husband and I went to San Francisco we drove into town which was great to have the freedom, but parking was challenging.  Our car was parked sideways on a hill slanted towards the passenger side at such an angle he had to hoist me up into my seat.  That was all fun and laughable until I heard a my jeans rip open! Ok they may have been a little tight to start, but a rip right under the buns line is hard to hide.    Leaving those haunting memories behind,  this trip we opted to take  BART (Bay Area Rapid Transit)  from a station about a 35 minute ride into town.   What we didn’t expect was that driving to the BART station our youngest son who is sitting in the rear seat in the very back of the car says the dreaded “I think I’m going to be sick”, which normally means you have about 30 seconds to open the windows, and a  few minutes to pull off the road and get out if needed.  Instead, he says those words and not more than 2 seconds later he is hurling in the back of the car!!! I shout “GRAB THE TRASH CAN” which thanks to Pinterest.com I found a great tip in using a cereal bin as a car trash can and line it with a plastic bag.. BRILLIANT!!!  even more brilliant used as a barf bucket!!  We stop and thankfully see the damage on the floor isn’t too bad and the towel we brought will soak up most the vomit and the rest got in the bucket and none on him! Towel and barf bag left at BART station needles to say.


I’ve never been in a subway EVER and my worrying nature couldn’t help but think about all the TV scenes of the robberies, gang violence, crashes and chases on the trains, not to mention we are in the center of earthquake central!   I carefully studied the evacuation poster on the wall, which didn’t help the anxiety... ok breathe.

THANKFULLY, we made it, got off the BART in the center of San Fran and BAM! there he/she was!!  PINK fishnet tights, high heels, tight short skirt, cropped shirt, beads and “girlies”, lipstick, earrings.. the works!!  “Welcome to San Francisco Kids.”  We all know that San Francisco has its own “reputation”, but I forgot to let my children in on the history, forgetting they might see people dressed in different “styles” that most men don’t  wear in the suburbs of Portland.  I don’t know, maybe this happens more behind closed doors in Portland than I know, but that is neither here nor there.

Moving on, we get our city muni -pass bus ticket , that is not cheap but covers all rides on busses, Cable Cars, and something else we never did find, for the whole day and is a lot cheaper than buying one-way passes.    A quick stop and walk through China town, for some reason,  felt very different traveling with kids than when it was just the two of us.  There are so many people walking around speaking chinese, we decide  I will take the lead the kids walk in the middle and my husband takes the rear of the Spears walking train.  We stop and gawk at the meat selections and play the “I wonder what animal that is hanging from the ceiling” game.  After seeing so many raw animal carcasses and fish heads we decided that perhaps moving down the way to “little Italy”  for pizza might be a better choice than finding  authentic Chinese Food in China Town. 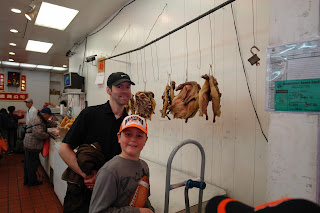 Little Italy at North Beach is a great place to hang out and find some excellent pizza slices.  If sunny, sit in the park next to the beautiful St. Peter & Paul Church, which is gorgeous!  Returning to our favorite pizza shop we sat down with our slices and then it happened…  “Iiiiiiiiimmmmmm Haawwwt…” I’m sorry but we are hours into a day that is going to be really long AND fun, AND we have driven 10 hours to see the sun after enduring countless cold rainy days in Oregon weather....whose child is this that is complaining of being hot on a 69 degree sunny day?  Suck it up kid!  OH right, this is the same kid that threw up his free continental hotel breakfast on the way, and as a result  has nothing in his stomach and is probably severely dehydrated… I lose major mom points.   A lot of ice water, amazing pizza and a new distraction of the cool tree in front of us turned his outlook on life and the journey into a nice photo session and a great distraction from his “sun stroke.”.
With the new photo journalist in tow..we climbed up the hill to COIT tower and he snapped pictures all the way up of the breathtaking city.  We talked about people who actually live on these hills and walk these hills every day, and probably don’t need a gym membership. (For the record I did not see one SF obese person, go figure). 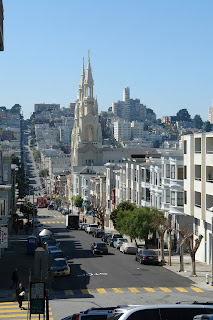 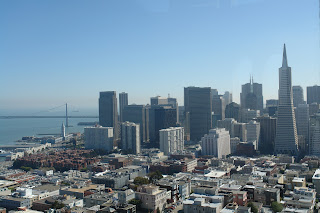 A top Coit tower is a one of a kind 360 degree view of the city.  I have been up there twice before and felt the extra money saved, and the re-entry to bad thoughts of me being up there while the BIG ONE hit,  was good enough reason to soak up some sun with my daughter down below, while the boys went up.    Opting to take the handy bus back down the hill, we realize even though the bus driver said she was going to our next destination, Fisherman’s wharf, she meant EVENTUALLY.  As we went the opposite way from Fisherman’s Wharf, we decided her eventually wasn’t going to fit our schedule.   We hopped off and found the nearest trolley stop and boarded it towards fisherman’s wharf, which seemed quite far so we were glad we found transportation!   Two seconds into the ride as I was fishing out my tickets to show the trolley guard, he says .. “ok eeeeevrybaaaauudy off” what? Huh? We just got here MR…and my son uh he’s he’s  DEHYDRATED!! “LAST STOP FOLKS” defeated we got off and realized the wharf was just right there but 2 longer blocks away.  Apparently, the Cable Car budget ran out in 1873 and they just couldn’t take it 2 more blocks… and why in the world did they even post a Trolley Stop sign 1 block from the end…are we on candid camera?

Fisherman’s Wharf:  Our 3 kids had their $15 ice cream cones at the Dryers Ice Cream Shop, saw the lazy sea lions while listening to tourists try to make the same honking noises the sea lions were making, which was strange, saw a few street acts including one guy who was actually playing the violin while using a bow with no hairs.  The guys that spray themselves metallic silver and stand on a crate are interesting to watch for about 2 minutes.  After about an hour walking around we found ourselves  arguing over what darn bus will take us to Golden Gate Bridge while trying to navigate the ever confusing map and trying to squash the idea of one person, who will not be named, who thought WALKING to the GGbridge would be a reasonable.  You know when you find yourself in that moment where you are talking to someone and it gets heated and more frustrating only to realize that the background noise is only adding to the problem? Well as if nails on a chalkboard, we are conversing right in ear shot of the horrible violin player noises!!  This guy was just smiling away as if he was playing first chair in the San Francisco Symphony.  We finely found the right bus line after loading several wrong busses and unloading 2 seconds later to wait for the right bus. Thankfully, the bus drivers can spot tourists and were very helpful… maybe it was the giant camera around my neck and the map and the not so amused family trailing behind. 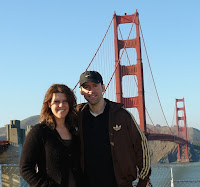 The Golden Gate Bridge was breath taking.  I had recently saw the episode on the Bachelor where Emily and Ben actually had a date climbing up the narrow metal columns up the bridge!! Wondering if I would attempt the same thing if I was on a TV show, not sure I would, without a heavy hitter sponsorship by a Depends.  It was sure a site to see even though only 2 of us got to walk across it a ways while I had to stay back with hurting feet people.

On the way back, re-tracing our bus path back to the streets of San Francisco where my idea was hi-jacked for the popular idea to walk back 2.5 miles mostly up hill!  What happened to the winey kids who didn’t want to walk across the GGBridge because their feet were tired!  After the steam simmered from my head,  we walked up some huge hills, saw some amazing homes and found ourselves right atop of the famous curvey road -Lombard Street.    Walking down Lombard is much more enjoyable than walking up and it led us right to the trolley area where we would catch a ride back to our station as the night was settling in.
Being a Friday, and after work hours, the cable cars back into the city center were packed.  Each time we’d see one coming there was no room for 5 people to jump on.  As the night got colder we began to think we may have to start walking up hills and then down to our subway center.  It was then I had a great idea!! Let’s catch an empty trolley going back down to fisherman’s wharf and then stay on it riding back up and over the hill!  That plan worked and we flew down and up the hills in the dark of night, freezing, and hanging on for dear life on the outside of the rails.  Of course I’m thinking of all the bad things that could happen to my children hanging on the side of a trolley car flying down the hills of San Francisco, but to see the lights come on in the city, the action on the streets, the smiles on their faces even through the biting cold air, was worth it and a good end to a long HOT day.  I will say,  this is one trip that will go down in history as one that my husband got more eye action going his direction than I or my teen age daughter did.   We made sure he was never left alone in a dark alley or near a cute table for two. 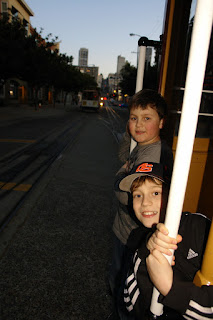 Posted by Courtney Spears at 11:16 PM