Green Thumb Invites Me Over And Shares The Crop

Green thumb I am not!  But my mother-in-law seems to have the "gift".  She says it took a while, so I know that I still have a chance.  How could I pass up a morning digging her plants up to transport them to my yard!  Her yard is one of those yards you can get lost in relaxation. Picture a nice summer day, flowers in bloom, a good book and a tall iced tea.  If she had a water feature and a hammock I might never leave.. maybe that's why she doesn' have those two things.. hmm..

I got the call to come over and divide some of the perennials in her yard in order to fill in the blank spots in my yard, which there are many.   She greeted me with a nice warm cup of coffee and amazing gluten free chocolate cake and then we she got to work.

The finished plant on the left is mature.. that's what my starter will hopefully look like next year if I don't kill it.  I was tempted to tell her she was needed in the house so I could then dig up the mature plant and be done with it, but I'll just have to wait until they are on vacation.

Below was the second shovel balancing act she did..she's amazing!  The first trick was on top of a stubborn fern.   I was so concerned I was going to be doing some first aide soon,  I forgot to snap a picture.  Both times sadly yielded no starts for me thanks to tough roots,  but it did provide some good entertainment. 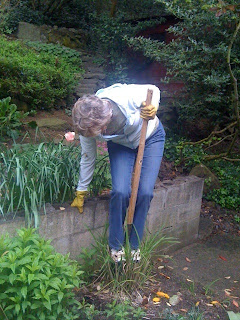 There is plenty to pick from and such a great way to save money! I asked her if this was similar to "sharecropping" because it sounded like what we were doing..she giggled.. and then we both were wondering what the actual meaning of sharecropping was.  We thought we were doing a small version of it at least.  The real definition would have ME using HER land to grow things and then ME share the crop with HER, so our sharecropping was a little backwards. 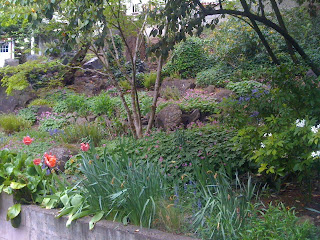 Two buckets of starts to go home and plant.  The bummer of the deal is I really won't see the joys of my labor until next year after they take root and mature.  Gosh that kind sounds like parenting, only it seems like that is going to take years to see the fruits of the labor and hopefully a good product! 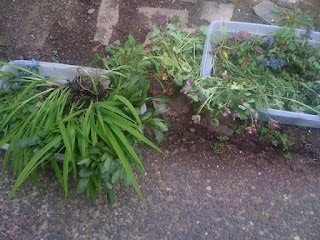 Posted by Courtney Spears at 10:54 PM