The Near T-Bone From Granny & Bertha's Envy

Yesterday, I was nearly T-boned by this beauty! Actually, I wasn't following her on purpose in revenge mode,  I turned the corner and found myself right behind her (and I wasn't the one taking the pictures).  First of all.. I LOVE her car.. secondly.. she was about 100 and barely could see over the wheel...hence the near T-bone! 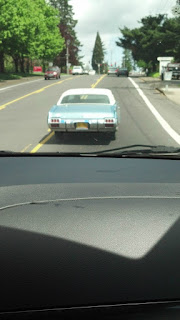 Upon closer inspection we find that she has been a proud AAA member for decades!  Which I am also a proud member and that membership got me a extra percentage on my Payless shoe source purchase yesterday, which by the way was where the "grannymobile" nearly T-boned me...ironic. 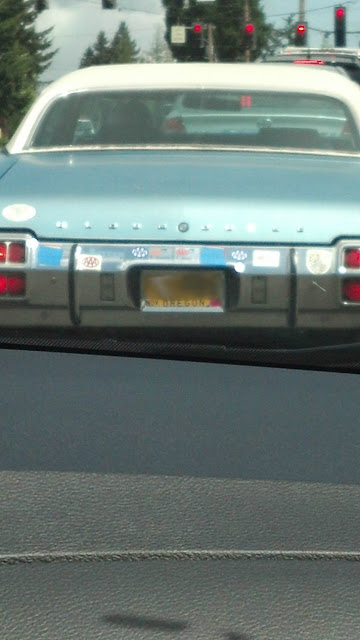 It wouldn't have been so bad I guess if she would have hit Bertha my ugly tan van, but I wasn't driving that car.. I was driving the NEW Dodge GRAND Caravan in White something that put poor Bertha to shame and deep depression early this morning when I pulled it into the driveway.
The new body style is much more robust! The side windows go down!
The doors automaticly slide
and nothing is broken!!! Bertha was green with envy...

Finally!! I look cool with all the other mom's in the lot!!
(see the white shiny one!?) Bertha would have looked like a bag lady in that lineup.. 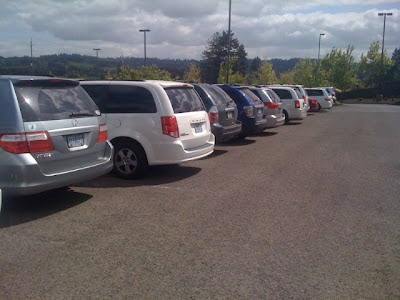 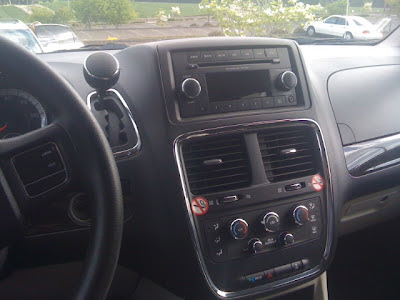 I was supposed to get a small econonmy car to save gas but when I got there, as if it was the best news in the world, they say "we've upgraded you to a medium size car at no extra charge!"  My choice now was a VAN or a small pickup.. are you kidding me?  They were still having their celebration of customor service and selling me on the joys of driving a van when I crushed that party and said "Funny, I drive a Dodge van EVERY DAY!!! and it gets HORRIBLE gas miliage"
(as she is erasing the box she checked indicating customer satisfaction)

Regardless it was better than the pick-up and once inside I begin to celebrate as well...as this was no ordinary van. I took my prideful car on my day journey and back and realized
I HATE VANS !!!
I would never ever in a million years buy a van again!! Ok.. maybe an Odyssey..  But that's it.

We bought our Dodge GRAND caravan in 2001 when our 3 kids were wee ones.  The only thing that sold me was that it featured LUXERY built in car seats!! It was glorious..HOWEVER that luxery stopped there as tape deck guy was still employed and won out on the debate of WHEN people would NOT want tape decks in their car!   I bet you 2002, that guy was out of a job and CD man was taking his family to Hawaii!
127,000 miles later that tan van Bertha has seen her day and made her memories BUT I still own her and even though a fancy white new lady tried to push her aside and make Bertha feel insufficient.. practicality wins out again. 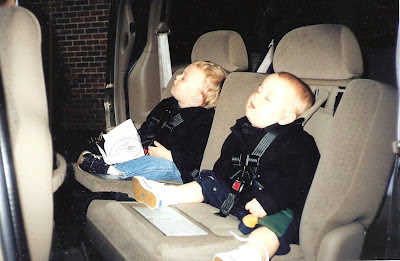 Posted by Courtney Spears at 12:47 PM

Email ThisBlogThis!Share to TwitterShare to FacebookShare to Pinterest
Labels: Bertha, The Mix