Dog Mountain- If you read my post from the other day I mentioned we are training for a walk around Mt. Hood.   I've been doing a lot of long distance walking this summer and feel I'm ready endurance wise as well as going up and down hills, but we needed to test our packs and boots out as well as get some major cardio and leg workout.  Dog Mountain is perfect for that kind of order.

I haven't climbed Dog Mountain since 1994 when I was trying to impress my then boyfriend Ward.  My family free time growing up did not include hiking or outdoorsy adventures unless it was on a sports field or next to a pool.   I only remember 3 things of that hike in 1994, a picture we took, me holding on to Ward's fanny pack as he pulled me up a steep section of the hill and finally lounging for 10 minutes at the top with the great view and wild flowers.   Everything else of that 6 mile quad killer hike is a blur.

This time was going to be different.. no helping me up this hill.  This is what we looked like at our 1.75 mile rest stop.  Ward was playing it up for the camera.. I was not.   Ward has always been this super human on mountains... on a side I can crush him in tanning by the pool and Marco polo.

At this point I'm a little discouraged because I thought I was in better shape.  One would think after logging nearly 90 miles in the last 7 weeks I would be a size 3, but that is the painful reality of exercise and the reason new years resolutions usually fail I guess.   Walking up this grade of a slope without places where it flattens out for very long is really challenging.
﻿﻿﻿﻿﻿

But a little portion of a Snickers bar and some water gives us a boost and we are on our way.  We finally crest out of the forest to the top of the first viewpoint.  If I wasn't competitive and didn't like to finish things I would have been happy to stop there, especially after Ward points out where the summit is which looks days away from our current pit stop.  It was this stretch that I named Fanny Pack Trail explained above, but this time I had no option as my "guide" was .25 miles ahead.   A little tail wind helped me but that left at the switch back and I was greeted with pounding gorge winds.   None the less with the dry grassy slope and my "guide" up ahead with this pack I couldn't help pretend I was part of the Von Trapp family escaping from the Nazi's going over the Alps to freedom.  It was exactly like the closing frames of "The Sound of Music" minus the leiderhosen and seven singing children.  Hallucination is common with fatigue I hear.

With .4 miles to go I spot another hiker coming down our direction.  He was very far away and small in the distance but not small enough for me to notice what appeared to be a black cast like boot on his left foot.  I said to myself.. "that a man is NOT hiking up here in a walking cast!!"  How defeating for us able bodied hikers who are at hallucination state.   As we approached we found that sure enough I see his foot casted up.  To make it more horrific the other shoe of choice for "Hercules" was a Crock!  He was nice enough to let me take his picture, and I told him he has put me to shame... which he laughed and told us how he broke his tibia on another hike. 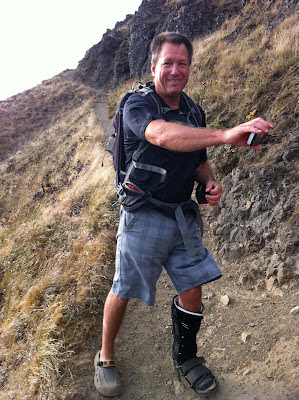 Up and around the bend we finally crested and, despite the cat 5 wind gusts as it seemed, were the only ones there on top of the world.
The way back down will I'M SURE be much easier!! keep reading.. 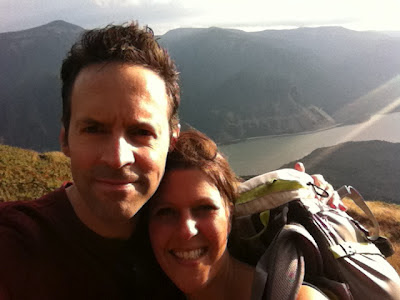 It is really hard to train for constant downhill and rocky surface.  I don't think my legs have ever hurt that bad or at least since college volleyball.  We had to hurry because we kind of cut ourselves short on time, went the .6 longer route back (not recommended for enjoyment) and it was getting dark.  I was leading us down and about 4 minutes into the walk I hear "WHOA" from behind me.
"What happened?"
Ward says "Did you see that???" A snake just slithered right behind your boots"!!
"UM THIS IS NOT THE TIME TO BE REMINDING ME OF SNAKES!!!!"
I asked him to keep those sightings to himself next time as I'd rather NOT know.
The mental intensity increased at that point as I was scanning all areas and trying not to think of snakes and freaking myself out.
I'm also placing myself in Season 2 of LOST where they find themselves walking for days and being chased by the Smoke Monster.
With literally minutes to spare with darkness setting in.. we FINALLY see our car.  It's the only one left in the lot.  I was glad to see that because then I knew that "Hercules" was not stranded somewhere on the side of the mountain with is cast and Crock shoe, which also meant it was food time.  We stopped in nearby Stevenson and shared THEE BEST Reuben Sandwich and Salad.   Any food would have tasted good at this point, but this sandwich was a winner.
To cap of the day we walk out of the restaurant and spot this.
They didn't even bark or budge while being photoed.. just two old dogs on a road trip I guess. 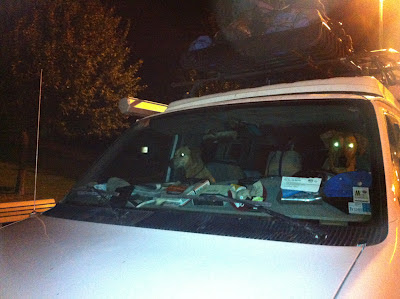 Posted by Courtney Spears at 9:11 AM