Meat of any kind and me have a love hate relationship.  I love eating it (some of it) but hate touching it.  If it looks like it's going to walk off the plate at any moment then forget it! The consistency has to show no signs of sliminess either.

This Thanksgiving I decided to host the family.  Planning the menu is always kind of fun, finding new things online to try.  The decorating comes together fairly easily but the fear comes wondering if the food will actually turn out.  I don't consider myself a great cook and have been known to cook on high but on the percentage I think if I following the recipe things turn out.

Two nights before as I saw the bird in the fridge I had only one thing on my mind and that was knowing in a day I'd be having to reach in for that neck they stuff in there and the bag, which really touching the raw carcass on the outside is one thing and pretty nasty feeling, but digging in the cavity is beyond what I like to do.  I was not raised on a farm thank goodness!!  So there he was.. found the neck which my boys immediately thought was super cool and figure since the bag of "innards" or giblets as some call it was not in there, they must have forgot to stuff it back into our bird.. oh well! That was until I posted that on Facebook and my friend said "NO it's on the other end!" oh great.
Knowing this could get very interesting, my husband grabbed the video camera.


Well that was disgusting.
Now the rest of the menu had to accommodate 2 gluten free guests which thankfully there are so many recipes out there.
Menu:
Mashed Potatoes From the Pioneer Woman Cookbook - 4 stars!!
Kittencal's Creamy Broccoli Bake - again 4 stars!!! (food.com)

Bread and Celery Stuffing from All recipes.com   3 Stars!!
(we cooked it outside the bird so it was on the dry side but the bird was very very tender)
Mom brought her homemade biscuits and fruit Salad
Mom-in-law brought pumpkin pies and Deviled Eggs
Aunt Erin Brought Amazing Homemade Clam Chowder!
the Turkey was soaked in a Brine from Martha Stewart overnight and was delicious!!!!
Dinner Success!!!!!
The Table
I love pretty things and centerpieces.  Love Candlelight and being able to cut live branches from outside and use them for free as a bouquet.  With 11 people around a table I knew I didn't have a big enough tablecloth and or table for that matter, and I always remember being the unlucky one as an adult at the "kid table" so I wanted everyone to feel part of the main table.  While at the fabric store and seeing how expensive it would be to cover the tables I had an idea pop on my head of inexpensive Burlap which I've seen all over the web used in various ways.   I also bought a half yard of two different kinds of fabric to create a runner.  The best idea thankfully came when I thought I should just buy a cheap black sheet to cover my table, which was only $11
So when it came to decorating it and tying the two together it was easy to interchange colors between the tables making them feel like they go together.
The other centerpiece items were things I had around the house or in the garage unused and a few branches from the yard and of course candles made for my favorite part of the meal and a cozy atmosphere.   I also bought a few yards of ribbon for a grand total of about $20 for the table decor which was FAR less money than some of those pre-made arrangements. 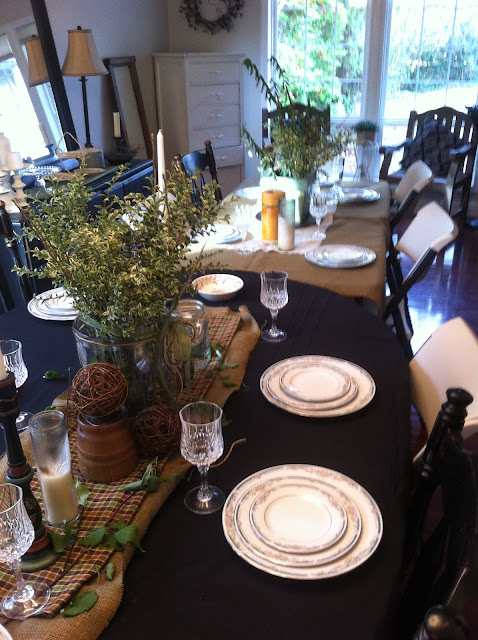 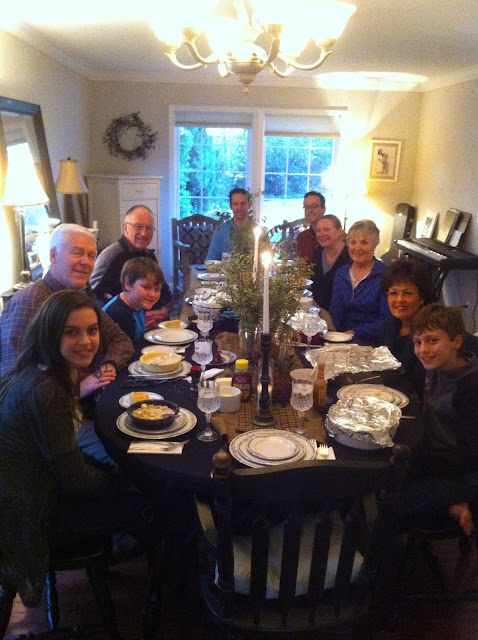 The Family Together...Thankful
Posted by Courtney Spears at 7:46 PM

Email ThisBlogThis!Share to TwitterShare to FacebookShare to Pinterest
Labels: Family